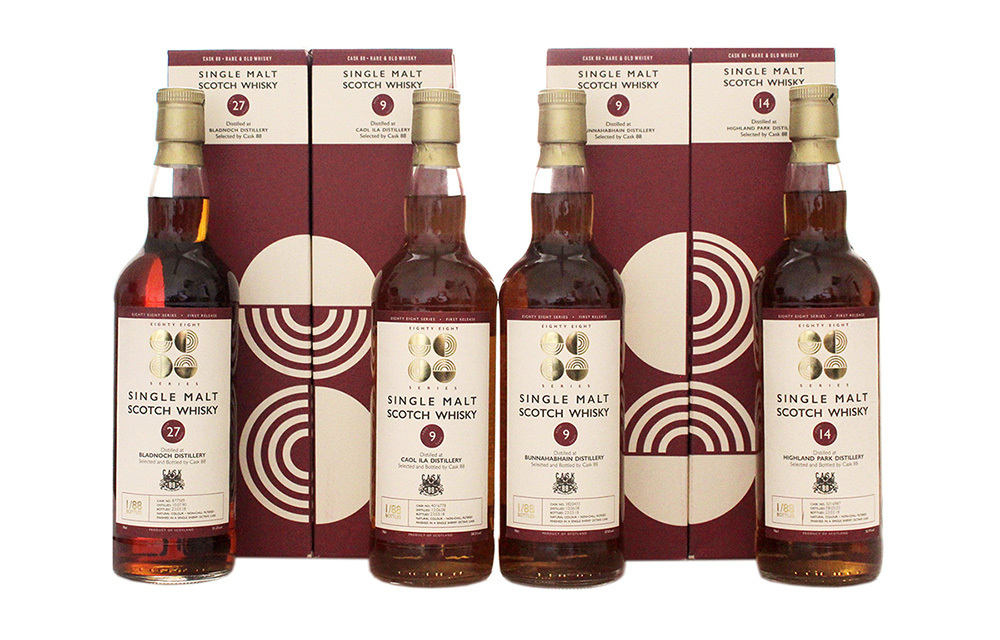 Edinburgh based Scottish whisky broker and independent bottler Cask 88 have unveiled their second series of Scottish single cask whiskies, all finished in quarter casks to produce liquid with a more robust flavour profile. The Eighty Eight Series features small batch expressions from Bladnoch, Caol Ila, Bunnahabhain and Highland Park, and offers whisky enthusiasts the opportunity to explore the impact of cask size on the maturation of the whisky.

Quarter casks, at one eighth of the size of a standard cask to hold whisky, are capable of holding approximately 50 litres of whisky each. Each quarter cask yields 88 bottles of whisky. “The smaller cask size maximises the contact between the spirit and the wood, theoretically producing a whisky with a stronger, more complex flavour,” said APAC Sales Director Patrick Costello. “Whereas the wider industry favours larger casks to produce whisky on scale, we wanted to select something a little different, and focus on producing small batch whiskies that excite the senses.”

The Eighty Eight Series is the second release of Scottish whisky independently bottled under the Cask 88 brand. The first bottling under the Cask 88 brand, a 45 Year Old Ben Nevis 1972 Single Malt from the Cask 88 Scottish Folklore series, with a design inspired by the Scottish legend of the Cù-Sìth, earned two Gold Awards at the 2018 International Wine & Spirit Competition: for Taste in the 30 – 45 year old category, and for Spirits Packaging.

All four whiskies in The Eighty Eight Series will be available from Whisky Foundation for worldwide delivery and through the Cask 88 website.